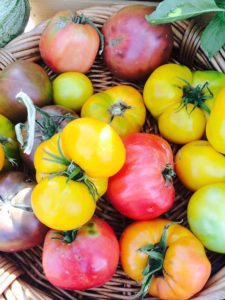 tasting dishes (spaghetti, lasagna, we’re talking about you). Michael Miller, however, has a vision for tomatoes that goes beyond cookbook recipes.

Just as any gardener, Mike Miller began buying and growing store-bought seeds to plant in his backyard garden. The plot twist in his story came when he decided to stop buying seeds and start saving them. In addition to saving seeds, he started another tradition, one that has impacted Groundwork Denver in an unfathomable way. This tradition birthed the seedlings available for Groundwork Denver’s Annual Seedling Sale.

“I just started in my backyard. The first year I did it, I think I bought nine or 10 tomato varieties and some of them were just outstanding. What I ended up doing was picking about three of those to grow the next year then tried several other new varieties. What I’ve continued to do over the years was to keep growing what I know is really good and experiment with additional varieties,” Miller said.

Now, 12 years later, Mike Miller has tested over 250 different heirloom varieties and only 18 of them have survived the tasting process, making them eligible to appear in our annual seedling sale catalog. Groundwork Denver’s Director of Urban Farming, Fatuma Emmad, said Michael has furthered the deep love she has for growing and eating tomatoes. She also said Michael has turned herself, as well as others into “tomato snobs.”

“Michael has helped further our tomato profile for our farm stand and seedling sale. He has been generous enough to share his seeds and plants with us all of the years we’ve asked and turned us into tomato snobs because of the amazing varieties he has shown and taught us about,” she said.

Michael’s process for determining which tomatoes are the best is quite simple. It is through this process where the Front Range’s best tasting tomatoes arise.

“The seeds that I’m saving are better than the ones I’ve bought,” Michael said. “I make a point, when I’m testing the tomatoes out, to not just try a single tomato and decide if it’s good or not. I line up several different varieties of tomatoes in a row and taste-test all of them. They might all taste good but some of them are very likely going to taste better than the others. That’s how I make my decisions. I determine, not only is it good, but is it better than the other tomatoes I’ve been growing?”

After a few years of experimenting with different heirloom tomato varieties and growing several other plants, Mike Miller decided to add another layer to his gardening, one which was closer to home.

“I started selling seedlings as a fundraiser for the daycare center my daughter was at. I would grow cucumber, squash, melons, herbs, peppers, chills and donated the proceeds of those sales to her school. Part of the money also went to Beinvenidos Food Bank. The intention was to sell to high-end chefs and restaurants while also giving back to the community and I felt really good about that,” Mike said.

Groundwork Denver is thankful for Mike Miller and his one-of-a-kind seedlings and are honored to be selling them again in this year’s seedling sale. As you browse the seedlings catalog and prepare to make your purchase, you may want to consider the one piece of advice Mike has to give.

“People think tomatoes are supposed to red and round but there’s a tremendous variety and they all taste different. I would encourage people to branch out and grow new and different things.”