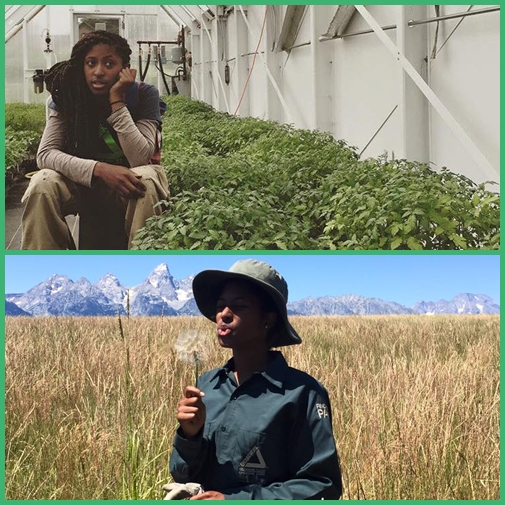 MAKALAH EMANUEL, pictured above at Grand Tetons, and back home in Denver, has been working with Groundwork Denver since 10th grade, for about six years. “A good way to get you off the streets and out of trouble,” according to Makalah.

There is always something new, something exciting brewing at Groundwork. This newness has kept Makalah Emanuel, 21, working with Groundwork Denver for the past six years, currently as a Green Team Youth Supervisor. “This year, the thing I am most enjoying is the ability to expand and work for the national organization, Groundwork USA,” Makalah says. When she first started at Groundwork, she “was just a city girl and the mountains were new” to her. As a senior at the University of Northern Colorado, her perspectives have grown immensely as she has deepened her work with Groundwork Denver.

She and other Green Team members have traveled across the country to convene at Grand Teton National Park in Wyoming. They are learning teamwork and backcountry trail skills that apply to Groundwork’s duties at each of their Trusts back home. They are doing everything from trail and bridge-building to invasive species removal. For Makalah, the hardest activity has been removing thistle, an invasive species. “In Colorado, a lot of our Green Teams spend part of their summers shoveling out different species of thistle at Arsenal National Wildlife Refuge,” Makalah explains. “To come to a different state and do it at a much higher elevation is hard.”

But what she is most proud of is climbing up the mountain along the Amphitheater Lake Trail. The hike was 10 miles and the team climbed up to about 10,000 feet in elevation. Makalah has not climbed in a while. “Being able to jump back in the rhythm of climbing a mountain, pushing myself and achieving the end result was not easy. I am proud of being able to get through it with a positive mindset.” When she was just a “city girl” and Green Team youth, Makalah camped and built trails for others to hike. Now at Grand Tetons, Makalah is building trails and hiking them. “To climb a mountain without dying and stay hydrated and do trail work…was the hardest but most rewarding thing ever,” she says.

Coming back from the Grand Tetons, Makalah is most enthusiastic about sharing her stories. She’s particularly excited to bring back what she learned at the National Elk Refuge. “The elk come to the Grand Tetons to hibernate. Learning how the elk migrate to this beautiful spot that I am at and how far some of the elk are traveling from was pretty amazing,” she says. She also wants to bring home some of her newly gained construction experience.

In Denver, she has worked a lot on farms with elementary school kids. Now, having built a bridge at Grand Tetons, she wants to use that knowledge to build something useful for the farm she works on. “I work with middle and high school children and they start to do farm work and love the environmental stuff, but I only know about cucumbers and weeds,” Makalah says. “Now I can talk to them about elk and bison!”

Makalah has also “been memorizing some of the things that the Park Rangers are doing” so she can help make sure that the Grand Tetons stay a beautiful and well-visited National Park. “I thought it would be a small space, a small mountain range. It turns out this place has so much history, places and people. The people who work here never forget the place they work at. They are lucky to be a part of that.” Now Makalah is a part of that too.

GWUSA worked with Superintendent Dave Vela and Megan Kohli at Grand Teton National Park to create an opportunity for Groundwork youth to work at the Park. In addition to the extensive amount of work the youth do back in their hometowns, they get to spend a week working at Grand Tetons with NPS’ historic preservationists and plant specialists on a variety of projects. This helps the youth connect their environmental restoration work at home to broader conservation efforts across America.