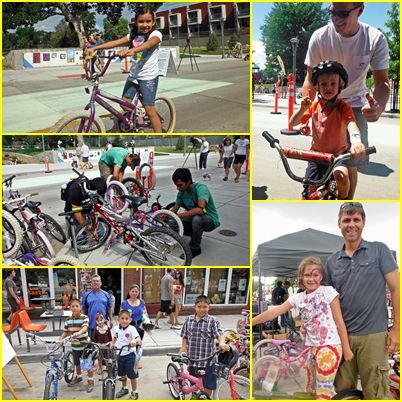 On Sunday August 11th Groundwork Denver was a part of the 3rd Annual Viva Streets Denver! Hosted by Livewell Colorado and BikeDenver, the event was a day long ciclovia on Tennyson St from w 38th Ave to W 46th Ave in the Northwest Denver neighborhood of Berkeley. The two Viva Streets Denver events prior to this year’s event were held in the Park Hill neighborhood of Northeast Denver but when we found out that the event would be hosted on the Northwest side of town we immediately leaped at the opportunity.

The event’s goals and mission to introduce the public to the benefits of increased walking and biking in our respective local communities falls perfectly in line with our Strive to Not Drive program focused on getting specifically residents of Northwest Denver (Jefferson Park, Highlands, West Highlands, Sunnyside, and Berkeley) to do exactly that, choose to ride their bike, walk, or use public transit to travel around their local communities. 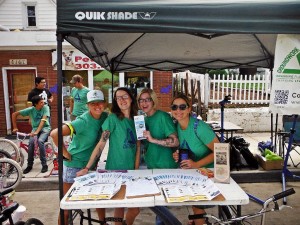 As you may or may not know we provide residents of the region with free resources and incentives to encourage them to increase their usage of bikes, public transit, and their own two feet! One of these incentive perks is FREE BICYCLES for youth of Northwest Denver and our monthly bike giveaway continued at Viva Streets Denver on August 11th. We also had our famous bike powered blender machine out at Viva Streets whipping up hundreds (yes hundreds) of fresh fruit smoothies! 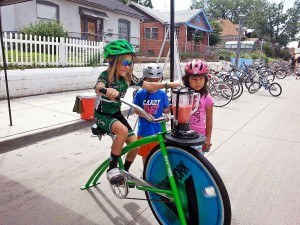 Groundwork Denver gave away 16 bikes, helmets, and Groundwork Denver giveaway packets to youth of Northwest Denver during the event! This giveaway was our second largest to date apart from our first giveaway of 2013 at the Barnum Park North Bike Skills Course back in March.

The expressions on the kids’ faces were second to none when they were able to get their hands on their new bikes. The bikes given away during the event were bikes that were donated to Groundwork Denver when we hosted the Deloitte Impact Day earlier this summer. 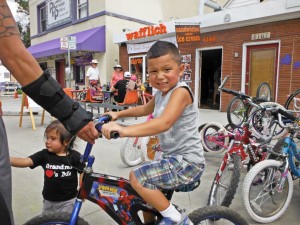 Our fifth giveaway of the year was another big hit and we’re already preparing for September’s giveaway at the Sunnyside Music Festival in Chaffee Park on Saturday September 7th when we focus on connecting teens who have just started the school year with a new bike to help get them to and from classes. 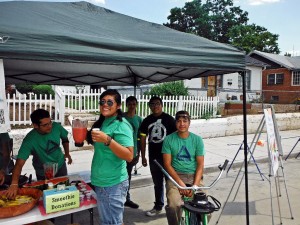 If you know any young people in Northwest Denver who are in need of a bicycle please contact Dele Johnson 303-455-5600 | dele@grounworkcolorado.org